Beth Fortenberry Oct 22, 2021 Beth Fortenberry
Ever wondered who invented basketball or who invented the Slam Dunk? Well, I can clear that up for you. James Naismith invented basketball and Joe Fortenberry invented the dunk. Yep, Joe’s my cousin and I grew up thinking everybody had a 6’8” relative with an Olympic Gold Medal that he kept in a shoebox, on the high shelf in the hall closet! Seven years ago, when Joe’s children decided this would make a good movie, I was summoned and it’s my pleasure to share this story with you. Logline: An orphan, James Naismith, wants to “make the world a little better than he found it.”Summary: It’s a blustery December day in Springfield Massachusetts. The year - 1891. James Naismith, age 29 is a rare combination of violent rugby player and Presbyterian minister. He has his dream job as an athletic coach at the Y.M.C.A. but his boss threatens to fire him if he doesn’t come up with a game to be played between the football and baseball seasons. Determined not to fail, he prays in earnest and through logic and elimination invents “a New Game” - Basketball. A few days later he sees a pretty Southern lady who just happened to invent the first football helmet and they fall in love. He keeps his job and gets the girl all in the same week! They marry and have children. In 1905, the family moves to Lawrence, Kansas so Naismith can head the Kansas University Athletic Department. There he meets Phog Allen, a superb basketball coach with a foghorn voice. Phog starts a campaign to put basketball into the Olympics. As Naismith mentors many students (among them African- American John McLendon, who later becomes the Father of Basketball Integration), he wonders who would even want to go to the Olympics. Now, it’s the Depression. 1932 to be exact, and Joe Fortenberry at 21 years old, wants to play in the Olympics more than anything. Phog Allen protege, Gene Johnson, discovers Joe and hires him to play for the Globe Refiners with the goal of going to the Hitler Olympics in 1936. In preparation, at a Madison Square Garden game in 1936, the world sees the fast break, the zone press and for the first time Joe Fortenberry unveils his own invention - the Slam Dunk! The Refiners join with the Hollywood Universals and they become the first U.S.A. Olympic basketball team. After much controversy and many obstacles, they arrive in Berlin to win. However, the rules are changed, the ball is a balloon beach ball and the game is going to be played outdoors in rainy weather! Their uniforms are stolen and other countries want to eliminate all players over 6’2”. Still America perseveres. In the thrilling last game, it’s pouring rain and even though the court is a mudpit, America wins 19-8 with Joe as the high scorer. The next day is sunny and beautiful for the awards ceremony. Naismith presents the first Olympic Gold Medal for Basketball to the U.S.A. team. “The happiest day of my life”. Indeed, James Naismith made “the world a little better than he found it”. 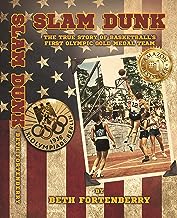